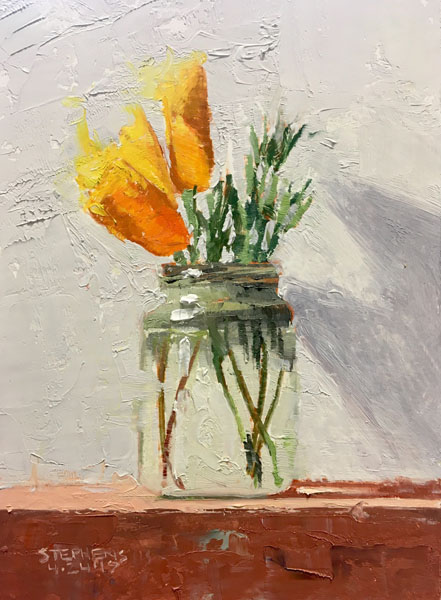 In this workshop, Craig will cover these topics:

Color: The focus for this workshop will be on color theory, specific color strategies and creating color relationships that mimic what we see. Craig will be putting particular emphasis on practical color mixing and matching.

Materials: The group will discuss options for painting substrates. Craig will provide sample panel options other than canvas or canvas board. He will also discuss oil painting in sketchbooks and non-traditional painting surfaces.

Set-up: Craig will show how he sets up his stage in his studio and discuss practical options for designing a work-space and lighting a subject.

Workflow: The workshop will cover some drawing, how to correct and adjust your painting, creating areas of focus with contrast and edge manipulation and motivation.

One of the most fascinating moments for Craig when viewing a painting is the instant when the abstract brushstrokes and blobs of pigment coalesce to become the thing that they were designed to depict. It is truly magical when the eye and brain take over and the combination of autonomous brush marks all come together to produce the illusion of mass and volume and light.

Over the past few years, Craig’s paintings have reflected his efforts to prolong this moment. By dragging bits of background into his subject and bits of his subject into the background, Craig is trying to draw attention to the painted surface while, at the same time, maintaining the illusion of the thing depicted.

Craig’s subjects are humble objects found around the home, at grocery stores or in workshops. He looks for easily recognizable, iconic subjects that resonate with his life experience. He most often chooses a point of view that he feels most clearly depicts the essence of his subjects.

Craig Stephens was born in Sacramento, California. He grew up in the foothill town of Weimar. He attended American River College and later transferred to UC Davis. He received his B.A. in art studio from UC Davis in 1993. During his time in college he had the privilege of taking classes from Gary Pruner, Roy DeForest, David Hollowell and Wayne Thiebaud. In 1996 Craig began teaching high school art classes at Chana High School in Auburn California. He recently retired from that position to concentrate on painting and private workshops and lessons. He has said that, “The practice of completing a painting a day suits my disposition and aesthetic. I have also found that modeling this sort of daily practice for my students is important.”

Stephens currently resides in Auburn, California with his wonderful wife and amazing children. His works can be found in private and corporate collections throughout North America and Europe.

$250 per person – Registration is closed
Materials for workshop